This Disneyland trip was my second time going so I generally knew what I wanted to do. This time around we got a three day park hopper pass and actually stayed for three entire days. With that much time, we were able to go on our favorite rides, meet some characters, and try out a few new things. Even then, we weren’t able to do everything, but that’s just life in an amusement park. I think 3 days was plenty because by the end of it my feet were seriously beat.

The evening before we went to Disneyland, Becky, Elisabeth’s mom, surprised us with some Disney-themed jelly beans! I chose the princess ones (it had the bubble gum flavor, which was my favorite as a kid). The jelly beans were slightly glittery too which added to the magic. It was a great start to our Disney adventure. 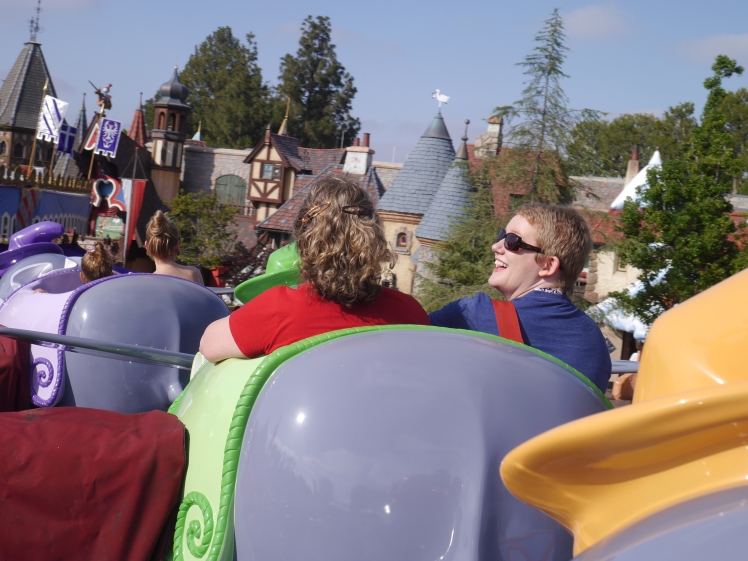 The first ride we went on our first day was the classic Dumbo ride. We didn’t go on it last time so we hopped on before there were any crowds. You can see Becky and Elisabeth in the picture above. It was a great first ride. The Dumbos went high enough that I could see portions of the park, it was so peaceful and beautiful. (It was also nice to feel a breeze, as we all knew that the day would only get hotter.)

The first characters we got to meet were Alice and the Mad Hatter. They were so much fun to chat with, the way the two of them interacted with one another was right on the spot. Becky asked the Mad Hatter if he had any tea and he proceeded to pull out a teacup from his pocket and offer her some “M tea” (“empty”, get it? So funny). I’m glad that we ended up getting a picture with them, they were quite fun.

I ate a lot of food in the parks during this trip. The first food item we had was the Mickey beignet (aka doughnut). They were hot and fresh and melted in my mouth. I had two of them but should have only had one because of how amazingly sweet they were. It was a nice treat though and yet again a nice addition to the trip.

Before the trip out, Elisabeth told me that Disneyland has Captain America and Thor, which was a revelation to me. We easily decided that we needed to meet the two of them so on the first day we lined up to say hello. Look at that Captain America. He was a sweet guy, very patriotic.

Although I am a fan of Captain America, let’s be honest, I’m an even bigger fan of Thor, so he was the one I was extremely excited to meet. He had a major fan fare for his introduction, there was smoke and music and his booming voice beckoning us to come in (we went in with a group of people). The experience was truly impressive and fun.

Here we are with Thor, the God of Thunder, the man with large muscles. 😉 Thor was a genuinely nice man. He helped a little girl hold his hammer and he talked to everyone who came to see him.

In the same building that the two heroes were located, there were also Iron Man suits as well as weapons from Thor’s world. It was cool to walk around and see different parts of the Marvel universe, next time I go back I’ll spend more time there to see what else there is to see. Seeing Thor and Captain America was a highlight of this trip, so glad Disney had this area set up!