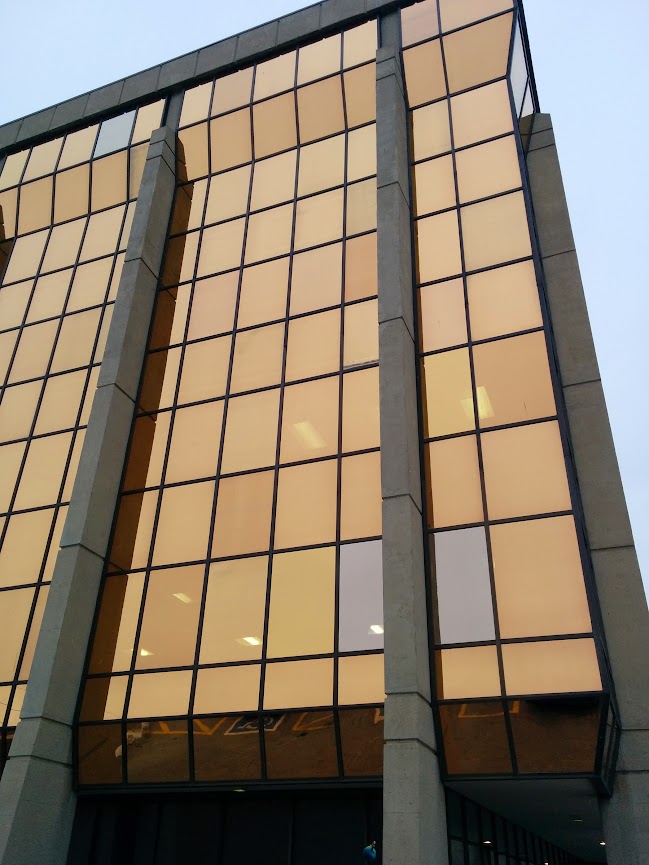 This morning I went to an athletics meeting downtown. It meant that I didn’t have to go into the office first, so I took Gene to work. We had some breakfast from Martine’s, of course. I don’t think I can NOT go to Martine’s if I’m at Gene’s work in the morning.

The meeting was…a meeting. I went for training and the guy training wasn’t really prepared. He trained us over the phone, didn’t seem to have a plan, and couldn’t even remember what state we were in. He spouted information so quickly and not clearly that although I did learn, I didn’t learn nearly as much as I could have. Everyone was in the same boat as me. I didn’t mind though, because it meant I got to meet a couple of people that I’ve spoken with and emailed this whole school year but never met before. (I also got free lunch)

Then I had to go back to work where I real life embraced me again. I ended up picking Gene up from work because I left slightly early and I felt like driving. Thus I have a picture of his office building.

In other news, Pippin has caught a mouse the past two days. So, really he’s caught two mice. I think it’s two at least. I wouldn’t let him bring it in yesterday so he ended up knocking it down to the first floor. I suppose he could have gone to get it this evening when we let him out. Gene opened the door to let him in tonight without checking him first so Pippin came running in with a mouse. At least it was dead this time. Gene picked it up and laid it down outside to try to teach Pippin that’s where mice stay. I hope it works, but I doubt it. Guess this is something that I’ll have to learn to deal with, Pippin’s going to be with us for quite a while.

One thought on “Work, Martine’s, and Pippin”