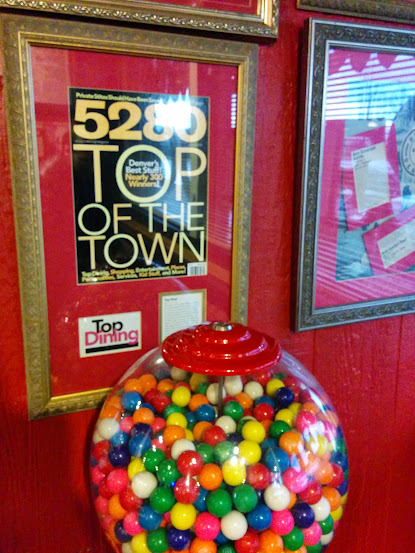 Had dinner at Sam’s No. 3 yesterday. It’s a restaurant I’ve been interested in going to for a while now. I drive by it fairly often and it’s been featured in Diners, Drive-ins, and Dines, an old Food Network show. So when the one reddit couple that goes to the dinner meetups suggested it, I was all down for it.

The first thought I had when we got there? “This menu is huge.” There was page upon page of breakfast items, sandwiches, burgers, Mexican food, and other odds and ends. I am truly not exaggerating when I say the menu was extensive and a bit overwhelming. They had lots of drink options too, alcoholic and non-alcoholic. Gene got himself a cherry shake.

I ended up getting a breakfast scramble with potatoes, sausage, scrambled eggs, cheese, and green chili. I had toast (came with the meal) and grits (added side) to complement it. The green chili was spicier than I was anticipating (for some reason I thought green chili wasn’t spicy?) but the meal was pretty good. Next time I’ll try it with their tator tots instead of potato chunks. Their grits were basically perfect too, which is hard for some places.

Their food prices seemed reasonable and the amount I got was plenty. I am interested in going again and trying one of their dinner items. They had a meatloaf melt which sounded really good.