On Saturday, I treated Gene and myself to a showing of She Kills Monsters.

I absolutely loved it. I was smiling, laughing, clapping, or cheering almost the entire time.

The play revolves around a recent college graduate who begins to play the Dungeons and Dragons (D&D) campaign that her younger sister (who died in a car accident) wrote. She embarks on an adventure in both fantasy and real life in order to discover who her sister was, and along the way, who she herself is. 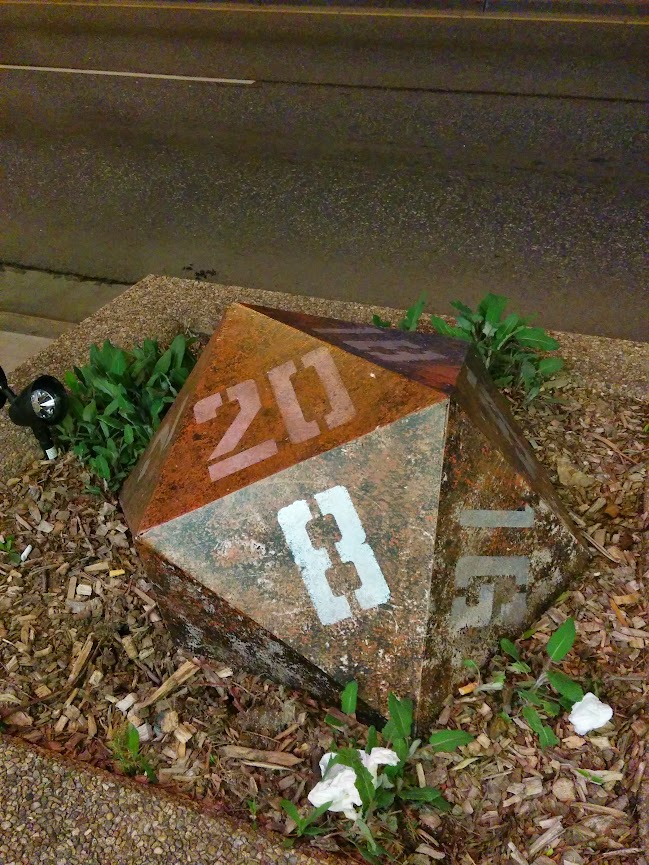 I had such a blast. This is definitely one of the best plays I’ve seen. The stage design was amazing. An entire Dungeons and Dragons landscape stood in the back with rocks, skulls, a bridge and a cool sky background. Huge dice, positioned on both sides of the stage, turned to morph into bedrooms and kitchens. The way and speed that scenes changed and how the actors used the props given was brilliant and seamless.

The costumes for the D&D characters were great and the fight scenes (yes, there were many) were even better. Oh the fight scenes, I adore you. All the actors did a fantastic job, their choreography was almost perfect. They had swords, shields, daggers, and other various weapons which made awesome sounds when struck against one another. Those scenes were some of my favorites.

At one point in the production, there was even a dance off. That was pure fun and something I think more productions should have. Eighties song after 80s song played as the actors showed us their moves. We got to see some classics like the lawn mower and the shopping cart. The audience cheered (and booed the bad guys), clapped, and whistled throughout the whole scene.

I especially liked the role that women played in the story. The majority of the characters were female and did they kick some butt! To see these women struggling with their own lives and then going into the D&D world wielding swords and killing monsters was awesome and inspiring. I love seeing strong women, both physically and mentally.

The whole thing was almost magical. The energy of the audience was something I’ve never felt before. We clapped and cheered the whole time. I’m not sure if I’ve ever screamed in a professional production before. I loved it. I was in my element. We need more geeky productions that have strong women roles.

I hope this play comes around again sometime because I would definitely see it again. If you ever hear of it coming to a theater near you, I urge you to go. It’s going to be better and more enjoyable if you know about the Dungeons and Dragons world, but it will still be entertaining if you’re not familiar with the game.

4 thoughts on “She Kills Monsters: A review”