Tuesday, Gene and I went to see Eddie Izzard. I believe he is the first comedian I have seen live (someone correct me if I’m wrong on that). I wasn’t sure if I would like the performance, as I didn’t know much about him or his comedy style. I saw his Cake or Death bit, which I thought was funny, but other than that, I’ve heard him on the comedy radio station a couple of times and that was it.

But Gene wanted to see him and since he was willing to pay for my ticket, I agreed to go, why not?

I’m so glad I went. It was hilarious, Eddie Izzard is so funny (even though I didn’t understand him the entire time and definitely didn’t get all his jokes). He’s quite clever. He was basically giving us a history lesson while making us laugh. I imagine that could be a difficult job.

I don’t know how his comedy show compares to others, but even his intro was awesome. He had a whole light show and music, it was fun. We didn’t get out until 10:30PM, which I didn’t love, but I suppose it meant we got our money’s worth.

Eddie Izzard is genuinely funny. He’s smart too and he seems to be as down to earth as a famous person can be. I like him. I would definitely go see his show again.

I was going to try to take pictures and even video of the show, but upon coming into the theater I was stopped by signs that said: Still, I ended up taking a photo of the stage before he came out, just to prove I was there! 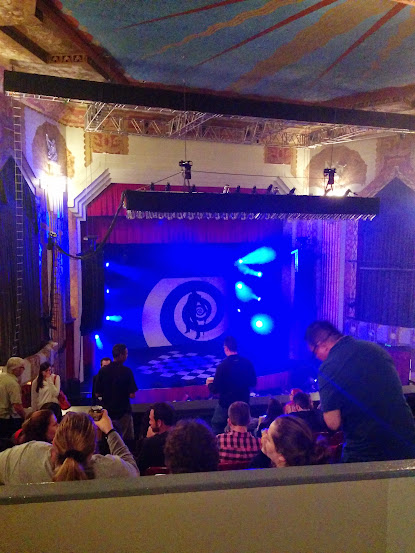 Next time Eddie Izzard comes to Denver, I’ll buy my own ticket!

One thought on “Eddie Izzard”