On Saturday, we started the day at the state capitol for a free tour. It was pretty decent but my favorite part was where we got to see fossils in the marble floors and walls. Did not know that was a thing and it was awesome. There were some really neat ceilings too. I like these kind of tours so I enjoyed it. It’s a good way to spend an hour and get a bit of history about a place.

Our next stop was the University of Wisconsin Geology Museum, another free experience. Tucked away in one of the university’s buildings, it was a cool place with lots of gorgeous gems and minerals, an entire glow in the dark section, and plenty of fossils. I thought it was extremely well done for a free university museum.

We grabbed some lunch at a random restaurant before heading to the Mustard Museum. This was the museum that jump started the decision to visit Madison so I was excited to see what it was actually like. 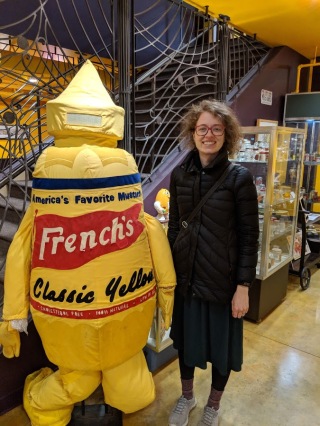 It was hilarious. In addition to being filled with an amazing amount of mustard jars, holders, and spice tins, the small space was covered with jokes about mustard and it’s evil counterpart, ketchup. Fake stories and fake art abounded and I loved it all. There was a lot of laughter coming from me. There was even a video about mustard but it was from the 90s so it was crappy quality, was really slow, and was probably a bit outdated (it featured a county fair in Canada of all things). What was certainly cool was that as we were heading up to the mustard shop, the owner and founder of the museum came down with a group in tow. I just stared at him for a second as I had just seen pictures of his face all over the museum. It was a small celebrity moment and I liked it.

We browsed the mustard shop, trying a lot of different mustards, including a walnut dijon and exocit ginger curry! We couldn’t take any mustards home with us because of TSA rules so we’ll have to buy some from their online store in the near future.

We had enough light left after our mustard adventure to check out the botanic gardens. I headed to the indoor conservatory first. We got in for free because of our Denver botanic garden membership but even without that it was only $2 per person, really great price. The conservatory was lovely and even had beautiful birds living within. It was so nice to be surrounded by plants while also being warm. But the warmth had to end at some point and we walked around the outdoor portion of the gardens. It was nice, but I think Denver’s might be better. Still, this one has a Thai pavilion, the only Thai pavilion outside of Thailand. That was cool to see and it was beautiful, especially glinting in the evening light.

Later that evening we went back downtown to eat at The Old Fashioned, a classic Wisconsin fare restaurant. We split mac and cheese and grilled cheese, because we knew we hadn’t quite eaten enough on this trip. The mac and cheese was delicious, I wish my stomach had been hungry enough to eat more than it did. The restaurant itself was neat – it was right across from the state capitol and was way bigger than it looked from the outside. We sat under Wisconsin pendant flags, surrounded by beer neon signs along the walls. It was a nice atmosphere and I would go back there next time so I could try some cheese curds. That’s one thing we didn’t do this trip.

Since we were so full after dinner we decided to walk around a bit before going to the car. We happened by the children’s museum which had these awesome street signs in front as an art piece. That was such a happy find, I got such joy from reading them all. I bet the actual museum is great. We walked over to the lake to watch the sunset for a bit. It was windy by that time so I kept trying to fly but I’m afraid gravity just wouldn’t have it. 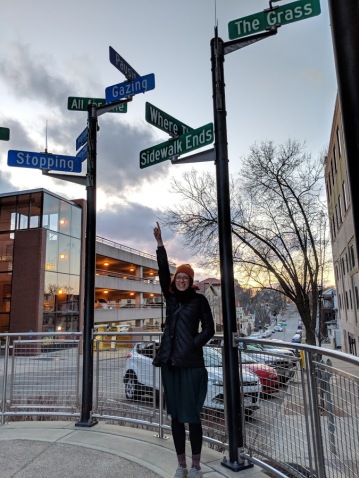